Who’s the Richest Child in the World? 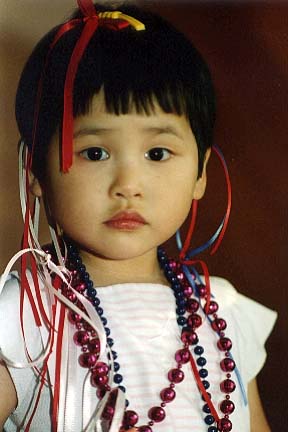 The three-year-old orphan came to us with nothing but the clothes on her back and a pair of red sneakers, new but smelling strongly of mothballs. She couldn’t run away, and finally decided to trust us, reluctantly.

We gave her riches beyond her wildest imagination. We gave her a rubber ball, and the next morning we presented her with a hand mirror. The third day’s gift was a rubber ducky. Each time she scampered off to the far corner of the hotel room with her treasures where nobody would snatch them away from her. For the first time in her life, she had all the marbles.

When we gave her a picture book, she wanted to look only at pictures of the ball, the hand mirror and the ducky—the extent of her strange, new, expanding world.

Arriving home in the United States, our newly adopted daughter, now named Helene, began to awaken to the beauty all around her. Meeting her two sisters with long lush hair, she stroked her own fresh burr haircut and expressed her desire for beautiful long tresses. Her artistry began to emerge as she hung ribbons and beads from her head, her neck, her ears. Her newfound riches amazed her. At the table, she left no scrap uneaten. Watermelon—after she ate the red part, she just kept on eating right through the green part.

But it was the dresses that overwhelmed her. One morning Helene stood in front of her closet for an hour. She was staring at the row of hand-me-down dresses. All beautiful. Not knowing which one to put on, she finally emerged from the bedroom wearing five dresses—one on top of the other. She must have thought she was the richest child in the world!

And she is. Think about it. She now lives in a home with her own family, with assurance that we won’t (and can’t) un-adopt her. She receives unconditional love, and enjoys the freedom to run, and play, and be a little girl. She has a new name, and a document hanging on the wall declares that she possesses citizenship in her new country. All this, and Heaven, too! She has discovered the Bible’s promises of eternal life through Jesus Christ.

If my kids are rich, what does that make me? Sometimes when I kiss them goodnight, I remind my two adopted daughters that some people think they’re rich because they have lots of money. “But I’m the richest man in the world, because I have you.”

(Holt International Children’s Services first published this story as “The Wealth of Family” in their magazine in 2007).